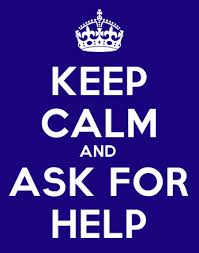 One of my New Year’s resolutions this year was to ask for help.  Even typing those words makes me want to put on a pair of Depends.  I never ask for help, I’m always the one helping everyone else out.   I’m also a sucker for anything broken whether it be a person or animal.  Who is going to adopt that dog at the shelter with two legs and a missing eye?…me!

I love the un-loved and help out those who are in most need.  Seriously, I go into prison and help murders!  Everyone deserves a second chance, EVERYONE, I don’t care what crime they committed.  We can all transform.  I don’t judge anyone on their past only who they are today.  I do though judge myself pretty harshly.  I think that is one of the reasons why I don’t ask for help.

One of my other resolutions is to stop comparing myself to others.  I feel that everyone is above me for some reason.  The only person I can compare myself to is the person I was when I when I walked into the rooms of recovery and got sober.

By comparing myself to others, I’m playing small.  When I compare, I’m saying to myself, everyone is better than me and I am not enough.  Helping other people so much is also a way to play small…it means I’m not deserving of good things but I can give good things to other people.

Yes, it’s about deserve-ability.  If I think I deserve something then what will I get?  I will get what I believe I deserve. It’s as simple as that. So says the law of attraction.

So, starting out in the New Year, you bet your ass that I made a vision board, read every book on success and say daily affirmations so that I can believe that I deserve everything I want out of life…But the kicker is that I had to start asking for what I wanted to.

You see, my writing partner Felicia and I wrote an f’ing awesome 1 hour comedy/drama pilot called, “Queen of Clubs.”  It’s about the stand-up comedy world when stand-ups where considered Gods.  Not one person who has read it, has not loved it.  We even developed it with this production company headed by a celebrity.

But, when the celebrities company just sat and sat on it, the development exec told us we could send out to other people.  This scared the shit out of me because that would mean that I would have to ask people I know to read it and consider it for either representation or sale.

I’ve been working in showbiz for close to 20 years so I do know some people.  I knew I had to come from a place of playing big rather than playing small.  I was to be confident, love myself no matter what, not fear rejection and just go for it.  I sent an email to 8 people I know confidently asking if they would take a look at the script and help me.

All 8 got back to me and said, yes, they would love to help me.  I put it out in the universe and that is what I got.  I got my first rejection today with notes which I didn’t ask for, but that’s okay.  I only take people’s notes if all the feedback says the same thing across the board.  The point is, I put myself out there and did it. I finally asked for help and the universe responded in spades.

I used to fear rejection so much I would just sit on writing that I knew was so great.  I don’t do that anymore.  I’m going to be rejected that is the name of the game in showbiz, but you never get that one acceptance if you don’t ask.

So, my words of advice to you artists out there:   Believe in yourself, believe you DESERVE, don’t play small, ask for help no matter how scared you are and most importantly, TRUST in your higher power. You’ve got nothing to lose and everything to gain.