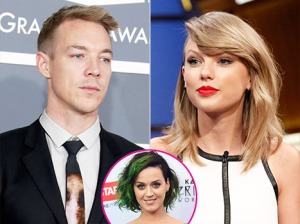 I read the above article about the Taylor Swift/Katy Perry’s boyfriend feud a few days ago.  Apparently Katy’s Perry’s boyfriend, a D.J. named Diplo, dissed Taylor Swift for having no “booty” and suggested starting a Kickstarter campaign to get her more junk in the trunk.

I could really care less about Taylor Swift, Katy Perry or her boyfriend.  What I do care about is body shaming.  Taylor Swift is a beautiful girl who looks like a super model there is no reason to be putting her down for lack of shape or otherwise.  It bothers me because the diss is from a shallow man who thinks the only way he can put a woman down is to make fun of her appearance.

It’s body-shaming both for thin and for fat alike that is the issue here.  Here in Hollywood we put such an emphasis on weight, beauty and age that we’re literally ruining women’s self worth and self esteem.  I feel bad for pop stars and actresses that have a good, maybe 10 years at best before they’re replaced by a younger starlet or pop star.

Look at Kim Kardashian, yes, she is still making money in her early 30’s but she is on the cusp of being pushed out altogether for a younger model (most likely her younger sisters).  Her relevancy is fading and she knows it.

Why as a society do we put our ladies through such torture?! Why are we ridiculing them for being thin, fat or old.  Has the women’s movement completely gone away?!  Have we reverted back to the 1950’s?  I think so.  We have to start valuing women no matter what their shape, size or age.  Beauty comes from the inside out not the other way around.

So, Diplo, I got news for you.  You’re going to age and you’ll lose your handsome looks.  It happens to everyone and hate to say it, Katy Perry will have probably long broken up with you before then.  You know what they say, when you point the finger at someone there are a million fingers pointing back and you.  Most of the fingers pointing back at you, Diplo, are all about your inadequacies and shallowness.

Some girls have bass some girls have treble.  Don’t let the dieting industry or Hollywood tell you that you have to look a certain way or that you have no value when you get older. Anything on the outside is impermanent but what’s forever and long lasting is your soul.

One Response to “Taylor Swift is All About the Treble, No Bass”