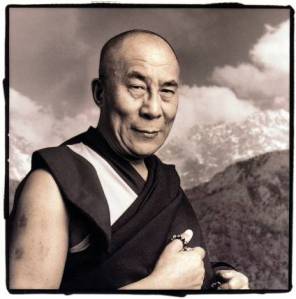 The Dalai Lama holds a special place in my heart because taught me about forgiveness. I had an experience a few years back that changed my life and I believe my father’s life forever. I wrote an article about it because it was that cool and wacky.

I was visiting my father in San Diego where he was at a doctor’s conference. I live in Los Angeles and I’m a stand up comic among other things so I booked a gig at The Comedy Store in La Jolla. Here I was selfishly thinking the trip was going to be about my Dad thinking how funny I was since he’s never seen me perform before.

But that is not what happened. My father and I had a spiritual experience that would bond us forever and we both had a psychic shift.

When my Dad and I went up to our room there he was, the Dalai Lama. He was staying on our floor and I don’t mean down the hall either. He was in the room next to ours. My father and I were the only ones on the floor not with the Dalai Lama.

For about four days we slept next to the Dalai Lama and he taught me one of the most valuable lessons I have learned and that is about forgiveness. Here is a man whom the Chinese invaded his country and killed thousands of his people thus forcing him into exile. The Dalai Lama could be super pissed but he has forgiven the Chinese. He doesn’t hold resentments. He has compassion for every living being, even his so-called enemies.

Like the Dalai Lama’s quote says above, he has kind thoughts towards others and he doesn’t get angry or think badly about others. Now if the Dalai Lama can forgive the Chinese who killed thousands of his people and forced him into exile, then I can surely forgive whoever wronged me.

They say resentment is like drinking a poison expecting the other person to die. I believe that. I know that getting rid of resentments isn’t as easy as it sounds. I have poured Miracle Grow on some resentments and nurtured them like I would a baby. Every time I’ve done this, only I have suffered.

So, without further ado, I present you The Self Worth Diet Forgiveness Meditation. It’s a meditation that I perform when resentful. It is a mixture of a few meditations I have learned here and there.

1) Sit either in a chair or cross-legged on the floor in a quiet and dark space.

2) Take four deep breaths to get you centered and calm.

3) Think of the person you with whom you hold the resentment and remember the ways he or she has harmed you. Remember that the person usually has harmed or hurt you out of their own fear and pain. Most of the time it’s their fear that has been driving them.

4) Picture the person in your mind and envelope them with a golden light around them as you offer your forgiveness to them. Say over and over again, “I forgive you.”

5) Continue this practice every day until the resentment has lifted. Sometimes it takes weeks but your heart will open and the burden of carrying around that hatred will be gone.

2 Responses to “Self Worth Diet – Forgiveness Meditation”